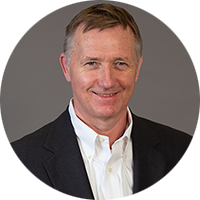 Denis Johnson is currently the VP/GM of Catalent Biologics’ largest site in Bloomington, IN. He has been in a General Manager (GM) role within Catalent since 2016, first serving the complex controlled release oral dose site in Winchester, KY followed by Bloomington in January 2019. He has over 30 years of experience in logistics, supply chain, and operations. Prior to joining Catalent Mr. Johnson was the VP/GM of Operations at Boston Scientific for 13 years. He also has previous leadership positions at Johnson & Johnson, Teradyne, and Placon Corporation. Mr. Johnson also spent eight years serving the US Army as an officer in ordnance and logistics. He received his bachelor’s in economics from the University of Wisconsin and his MBA from the University of South Carolina.